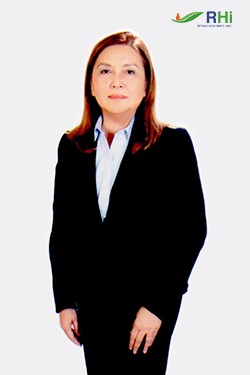 65 years old and is a Filipino.
She was elected as an Independent Director to the Board of Directors on April 30, 2019 and as Chairman of the Audit & Risk Committee.

Dr. Villanueva obtained her Accounting degree (BSC) from Holy Angel University in Angeles City in 1977 and passed the CPA licensure examinations in 1978.

In 2011, she pursued her post-doctorate studies and completed the Advance Management Program, a program designed for top executives from all over the world, at the Harvard Business School (AMP181) in Boston, Massachusetts; and in December 2014, she completed the one-year Challenges of Leadership Programme: Crafting Reflective Leaders at the Insead Business School in Fontainebleau, France.

Dr. Villanueva is a partner of accounting firm Sicangco Menor Villanueva CPAs (SMV). She sits as an independent director of the Metro Pacific Transport Corporation (MPTC), the transport group of the Metro Pacific conglomerate, since 2009 and the Manila North Tollways Corporation (MNTC) since 2014. She chairs the audit committees of both companies.

She is currently a member of the Professional Regulatory Commission’s Board of Accountancy. She has been in practice for more than 35 years, with her field of competence being in audit and management consultancy. Dr. Villanueva is also involved in accreditation, performance evaluation, strategic planning and development, as well as forecasting and budgeting projects for academic institutions, being exposed to the academe for over 30 years.
In June 2014, she concluded her eight-year term as President of the Holy Angel University, which she had served for 33 years. Before she was appointed as University President in August 2006, she served as Dean and full professor of the College of Business & Accountancy for 25 years, and of the Graduate School for 10 years.
Dr. Villanueva was admitted as a Fellow of the Institute of Corporate Directors in August 2014.

Dr. Villanueva was awarded the Most Outstanding President of PICPA in 2004.

In May 2014, Dr. Villanueva was one of the Outstanding Filipino Mothers who was honored and recognized in the 21st Ulirang Ina Awards organized by the Mother’s and Father’s Day Foundation.