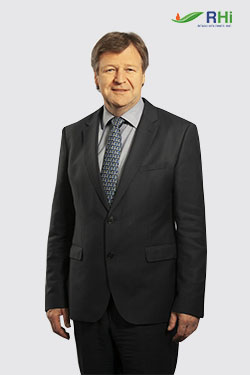 Mr. Young graduated at the Waid Academy at Fife, Scotland. He finished his Master of Arts in Economics with Honors at St. Andrews University. He has been a member of the Institute of Chartered Accountants in England and Wales since 1982.

Mr. Young is the Executive Director and Chief Financial Officer of First Pacific Company Limited in Hong Kong. He is currently a Director of Metro Pacific Investments Corporation, Goodman Fielder Pty Limited, PacificLight Power Pte. Ltd., and FPM Power Holdings Limited. He is also a member of the Advisory Board of PLDT, Inc. Mr. Young is also a Commissioner of PT Indofood Sukses Makmur Tbk and a Trustee of IdeaSpace Foundation, Inc. He worked for PricewaterhouseCoopers in London and Hong Kong from 1979 until 1987, at which time he joined First Pacific as Group Financial Controller. Mr. Young moved to Metro Pacific Corporation in 1995 as Finance Director until November 1998 when he became the Chief Financial Advisor of PLDT. He returned to First Pacific as Chief Financial Officer in 2015 and as a member of the Board in August 2017.