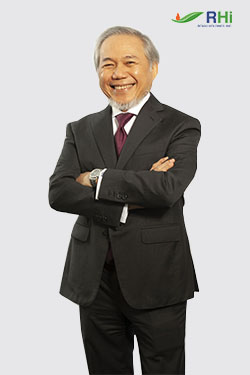 Atty. Espinosa is an Associate Director of First Pacific Company Limited. He is a Director of PLDT Inc., Smart Communications, Inc., Manila Electric Company (Meralco), Metro Pacific Investments Corporation, Meralco PowerGen Corporation, First Agri Holdings Corporation and First Coconut Manufacturing Inc. He also serves as an Independent Director of Lepanto Consolidated Mining Company (Lepanto) and Maybank Philippines, Inc. (Maybank Philippines). He is the Chairman of the Audit Committee and Nomination Committee of Lepanto and the Risk Management Committee of Maybank Philippines.
Atty. Espinosa is the President and Chief Executive of Meralco, the Chief Corporate Services Officer of PLDT and Smart, and Head of PLDT's Regulatory and Strategic Affairs Office. He is also a Trustee of the Beneficial Trust Fund of PLDT. He is the Chairman of PhilStar Daily, Inc. and BusinessWorld Publishing, Inc. He is the Vice Chairman of First Agri Holdings, Inc. and First Coconut Manufacturing, Inc. He is also the President and Chief Executive Officer of Mediaquest Holdings, Inc.
He joined First Pacific in 2013. He is currently First Pacific Group's Head of Government and Regulatory Affairs and Head of Communications Bureau for the Philippines.
Prior to joining the PLDT Group in 2000, Atty. Espinosa was a law partner at SyCip Salazar Hernandez & Gatmaitan, the largest law firm in the Philippines, until June 2000 and was a member of the firm’s Executive Committee. He was a law lecturer at the Ateneo de Manila School of Law from 1983 to 1985 and in 1989. After finishing his Master of Laws degree, he worked as a foreign associate in Covington & Burling, the largest law firm in Washington, D.C., USA, from September 1987 to August 1988.
He is a member of the Integrated Bar of the Philippines, Philippine Bar Association, and Inter-Pacific Bar Association. He is also a member of the Executive Committee of LAWASIA Energy Section. Asia Law & Practice, Euromoney and The Asia Pacific Legal 500 named Atty. Espinosa as one of the leading capital market lawyers, and among the leading project finance lawyers, in the Philippines from 1996 to 2002.