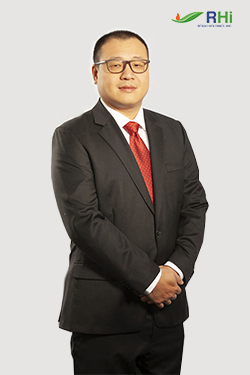 46 years old and is a Filipino.
He was appointed on December 16, 2020 as Executive Vice President - Chief Commercial Officer/Chief Risk Officer effective January 15, 2021. He was the Group's Senior Vice President for Marketing & Trading, which was later renamed Commercial Operations, from January 2015 to April 2019.

He has over 20 years of experience in the field of agricultural and energy commodities, specializing in sugar, fuel ethanol and thermal coal. After serving as Head of RHI's Commercial Operations for four years, he joined PILMICO as Vice President - Head of Trading. He has held senior commercial, general management and business development roles in the Philippines, Hong Kong, Taiwan and Mainland China for leading global commodities companies like Cargill, ED&F Man, Sucden, Wilmar and Trafigura, among others.