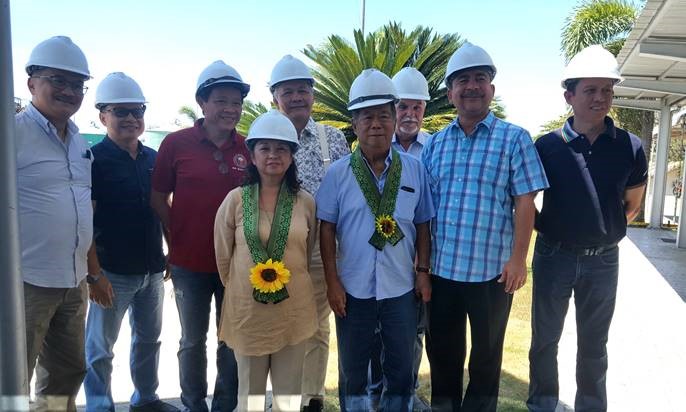 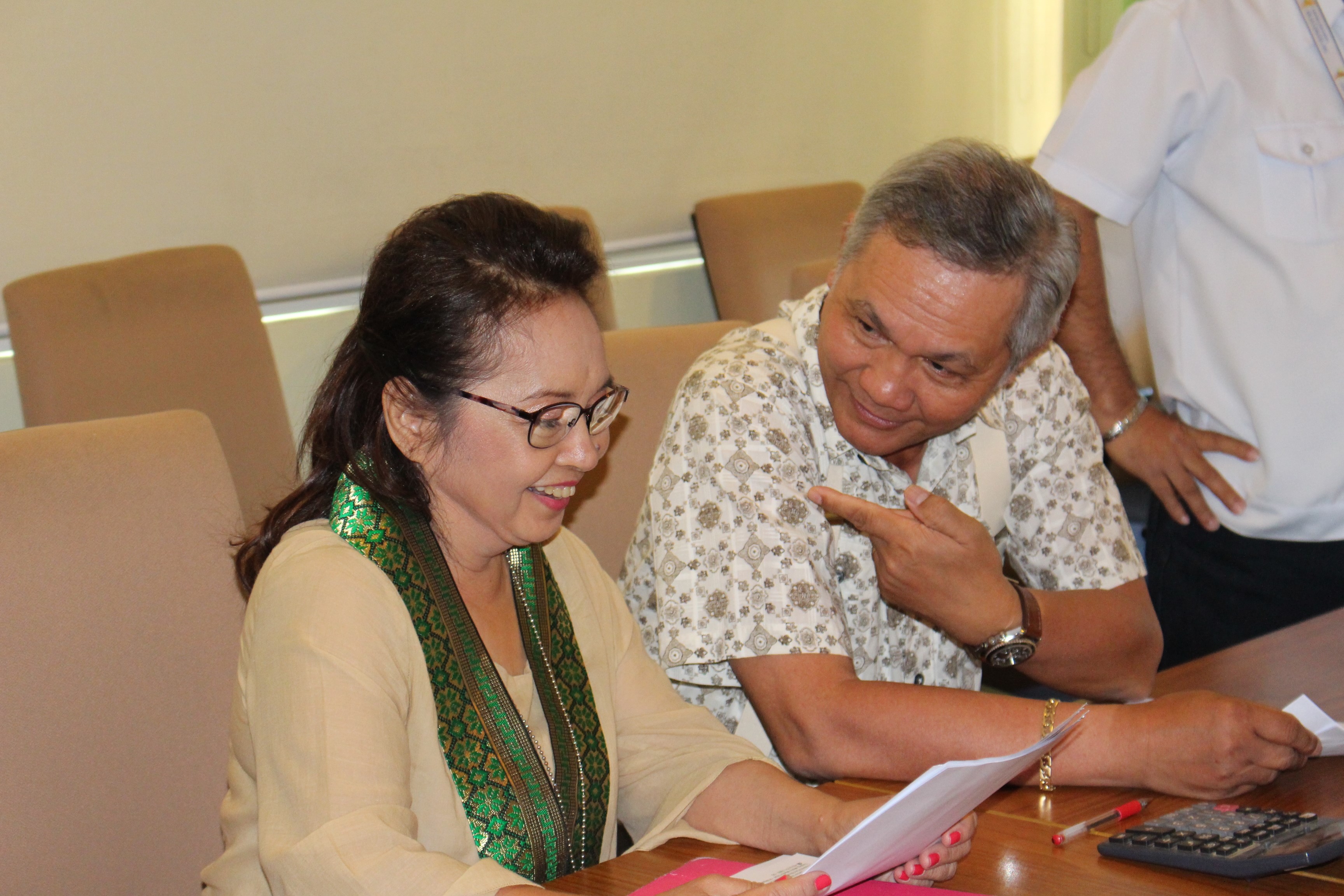 Speaker Arroyo and RHI PCEO Tubio during a light moment 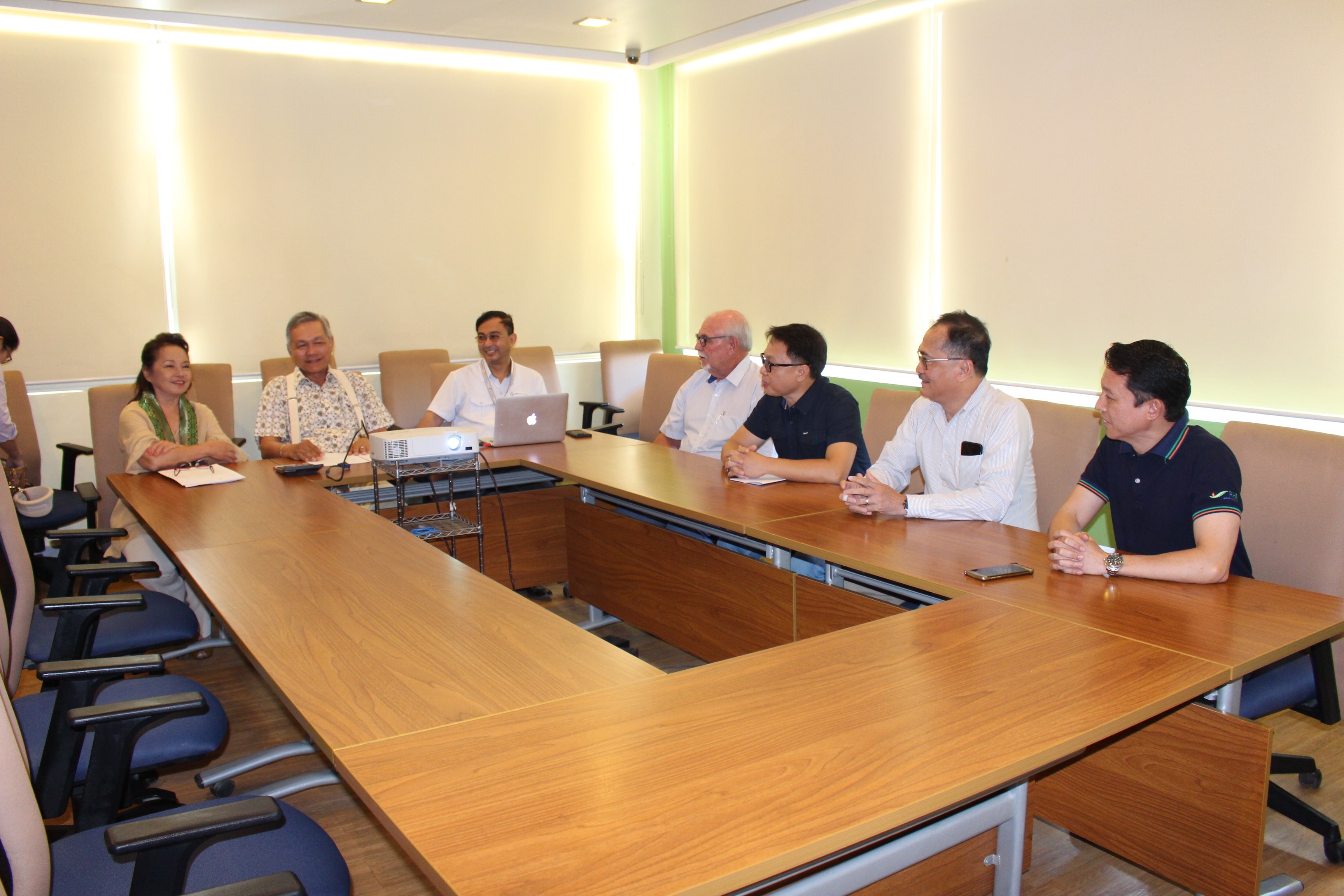 SAN CARLOS CITY, NEGROS OCCIDENTAL – Former Philippine President and now House of Representatives Speaker and biofuels advocate Gloria Macapagal-Arroyo yesterday visited San Carlos Bioenergy, Inc. (SCBI).
RHI President and CEO Hubert D. Tubio led the team who welcomed Speaker Arroyo together with Negros Occidental Governor Alfredo Marañon, Jr., Negros Occidental First District Representative Melecio Yap and San Carlos City Mayor Gerardo P. Valmayor.
Mr. Tubio, together with RHI Executive Vice President/Chief Operating Officer for Sugar Arcadio S. Lozada, Jr., RHI Vice President and Chief Manufacturing Officer for Ethanol, and Ethanol Producers Association of the Philippines (EPAP) President Jose B. Villanueva III, SCBI Founding President Luis O. Villa-Abrille, RHI Agri-business Development Corporation General Manager/Vice President Jose Manuel L. Mapa and SCBI Assistant Vice President and Factory Operations Head Damaso T. Agudelo, Jr. presented to Speaker Arroyo the achievements and the challenges of SCBI in the past 14 years.
Earlier, Mr Tubio prepared a letter to Speaker Arroyo, seeking for her intervention to address concerns on the supply of molasses in the country. “The supply of molasses in the country has been challenging. As by-product of sugar milling, molasses supply is affected by sugarcane production,” he said.
Upon reading Mr Tubio’s letter to her during the briefing, Speaker Arroyo immediately scheduled a meeting on April 25 to flesh out the challenges affecting the ethanol industry. The Speaker appointed Rep. Yap to chair the meeting for the Visayas Oversight Development Committee.
Speaker Arroyo said SCBI is one of her “favorite projects”. Speaker Arroyo, as then Philippine President, attended the groundbreaking ceremony of SCBI in 2005. The plant began operations as the first bioethanol manufacturing facility in the Philippines and Southeast Asia in 2009.
Speaking to reporters after the meeting with RHI and SCBI officials, she said: “I am very glad that they [SCBI] still own and have even expanded the bioenergy plant despite the challenges. They did the brave thing.”
In an interview with reporters, Mr Tubio said that RHI and SCBI appreciate the immediate action of Speaker Arroyo in convening the Visayas Development Oversight Meeting on April 25 to flesh out issues affecting ethanol producers.
“The Speaker’s action is very favorable and we appreciate it. She was the one who started the Bioethanol Program and we are glad that she understands the big challenge that ethanol producers face such as the lack of feedstock,” Mr Tubio said.
Noting that RHI, as part of the umbrella of companies under business tycoon Manuel V. Pangilinan, promotes sustainability across all its operations, Mr Tubio added that “bioethanol fuel supports the environment and broadens the market for Filipino sugar farmers, and in turn, boosts rural economic development.”
Mr Villa-Abrille said the action to consider the plea of ethanol producers would redound to the “greater good”, noting that 950,000 metric tons (MT) of molasses from the 1.1 million MT available in the country annually, go to ethanol producers. “That is not even significant to cater to the E10 requirement. The demand for fuel is now up at 600,000 liters from 440,000 liters,” Mr. Villa-Abrille explained.
Mr. Lozada, who was with Mr. Villa-Abrille from the foundation of SCBI up to now, said that a review of the Implementing Rules and Regulations (IRR) of the Biofuels Act of 2006 would enable the law to achieve its full potential.
Mr. Villanueva, who was elected recently as EPAP President, had steered the group of ethanol producers to draft a letter to the Department of Energy, to echo the prevailing sentiment on the supply of molasses.
“The growth in capacity of ethanol producers is not equal with the available feedstock. We need to bridge that gap in a controlled process. We must cope up with the optimization and utilization of plants. We won’t stop operations due to lack of supply,” Mr. Villanueva said.
Meanwhile, Mr. Villanueva also noted that the visit of the House Speaker provided an opportunity for them to show the progress of SCBI as one of the key ethanol producers in the country.
“We are glad to show how SCBI progressed through the years, especially with the unveiling of our multimillion Anaerobic Digesters last November and the plant’s improved daily production capacity of about 150,000 liters,” Mr. Villanueva said.
During the meeting, Mr. Agudelo assured Speaker Arroyo and Negros officials that the plant is focused on enhancing further its production to support the national demand for bioethanol fuel. “SCBI continues to implement operational enhancements to contribute significantly in meeting the growing demand for bioethanol fuel,” he said.
Mrs Arroyo launched the creation of an “ethanol corridor” in the Visayas from San Carlos City to Tamlang Valley in Negros Occidental during her term as Philippine President, in support of her agenda then to ensure economic development is not concentrated only in Metro Manila.

RHI is listed in the Philippine Stock Exchange (PSEi: ROX). Further information can be obtained by visiting the web at www.roxasholdings.com.ph