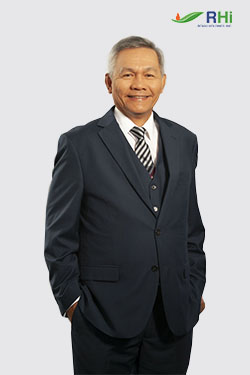 % Shareholdings - 0.000%
65 years old and is a Filipino.
He was elected as a member of the Board of Directors on
December 16, 2015 and as President and Chief Executive Officer
of the Group effective January 1, 2016.

Mr. Tubio is also an Awardee of the University of the East — Business Management’s Diamond Jubilee Alumni Achievers’ Award in 2006. He attended the Deutsche Telekom Global Event in Bonn, Germany in January 2002; and served as JDI Corporate Observation Group Leader for the team that visited the Louisiana Sugar Industry, at Lafayette, Patouville and New Orleans, Louisiana, and Hawaiian Sugar Industry in Maui, Hawaii, USA in November 1997. He also attended the International Society of Sugar Cane Technologists (ISSCT) Congress in Cali and Cartagena, Colombia, South America in September 1995; and the Sugar Production and Processes Hands-On Technical Training of Moreton Sugar Company, Ltd. (Bundaberg Sugar Group) in Queensland, Australia from July to August 1993.