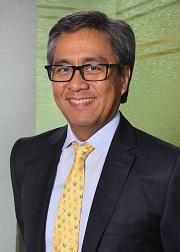 Mr. Perez is an avid environment advocate and renewable energy investor. He is CEO of Alternergy, a wind and mini-hydro power developer, and Chairman of Merritt Partners, an energy advisory firm, and Chairman of Solar Pacific, an off-grid island solar PV developer.

He has been an independent director of regional companies in Australia, the Philippines and Singapore. He is an independent director of ST Telemedia, the Temasek holding company for telecom, data centers and mobile technology, and is an Independent Board Adviser of Banco de Oro, the Philippines’ largest commercial bank. He is a member of the Advisory Boards of Coca-Cola FEMSA Philippines, Geneva-based Pictet Clean Energy Fund, and the Yale Center for Business and Environment. His philanthropy involvements are focused on the environment. Mr. Perez is chairman of the National Advisory Council of WWF-Philippines and treasurer of the WWF-International Board, and a trustee/adviser of the Asian Conservation Foundation, Bhutan Foundation, Solar Energie Foundation and Solar Car Challenge Foundation. Mr. Perez was Philippine Energy Minister from 2001 to 2005. He boosted energy self- sufficiency, promoted clean indigenous energy, and crafted an ambitious renewable policy framework. He served briefly in early 2001 as Deputy Minister for Trade and Industry.

Prior to 2001, Mr. Perez had 17 years’ experience first in Latin American debt restructuring at Mellon Bank in Pittsburgh, and later in debt trading, capital markets, and private equity in emerging countries at Lazard in London, New York and Singapore. At 35, he became General Partner at New York investment bank Lazard Frères as head of its Emerging Markets Group. He was Managing Director of Lazard Asia in Singapore from 1995 until 1997.

Mr. Perez founded Next Century Partners in 1997, a private equity firm based in Singapore. In 2000, he founded Asian Conservation Company that acquired El Nido Resorts, an award- winning eco-tourism destination in Palawan. In 2006, he invested in Northwind Power, the first commercial wind farm in Southeast Asia.

He has consulted for the Asian Development Bank (ADB), International Finance Corporation (IFC) and numerous firms on renewable energy. With his various involvements, the media has dubbed him as the Philippines' “renewable czar”.